I have been urged by a very good friend to share Jack's story and I pray you are all blessed by it.
It seems God knew long before me that Jack was going to be my son.

In June 2009, I travelled to Xi'An to adopt my daughter, Brighton Faith.  She is from a very rural area in ShaanXi province called Yan'An.  I visited there in 2008 when I went to take Brighton a walker to help her learn to ambulate. She had a very severe club foot then as well as spina bifida.  Since I had already been to see her SWI, I did not feel it was necessary to travel 4 hours to visit again. So, we found ourselves in Xi'An with time on our hands.

During my waiting weeks for Brighton, I had agreed to deliver some boxes to Starfish Foster Home. I took one with me on the plane and checked it as a bag. Upon arriving, I mailed it to Starfish so I did not have to lug it all over Beijing while I visited with my "Chinese sister" Angela. The box arrived before I did in Xi'An.

I had all the contact numbers for Amanda DeLange, who is the founder of the home and a very active momma to 50 kids she fosters.  I called and made arrangements to visit and see what Starfish was all about.
I was excited to go see the kids and look into how I could help Amanda with her needs for the children.

Angela, Brighton, and I went to Starfish by taxi in the morning and arrived at the gated apartment community.
We found the right apartment building and headed up by elevator to the apartment.  As the doors opened, I gazed into the hallway and saw two four seater strollers and many other toddler play things.  Amanda was at the door seeing out a group of Australian phyisicans.  She has world wide connections and this is how she saves so many tiny lives.

After hugs and greetings we were ushered inside to be asked to take off our shoes and have a look around.
It was June and stinkin' hot outside---the apartment did not have AC so the windows were open and the babies and nannies were glowing with perspiration.  There were truly babies "wall to wall".  Nannies sat with babies in their arms smiling a welcome to me. 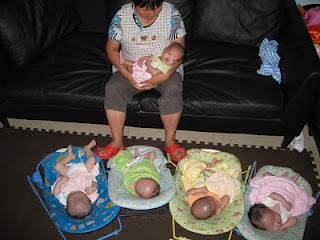 I made the rounds to see each child as Brighton wimpered from her stroller.  She was having no parts of getting out....the stroller was her ticket out with mommy.  This apartment had a wide range of ages represented and I was just amazed at how well the children got along and how organized the home was -- especially with the number of people and children in there day to day.

The children were certainly being cared for in a loving environment which is not the case in most orphanage situations!  These little lives were being shaped by their nannies.  They were being given security and love and this is what makes for a healthy child...and a healthy bonding/attachment experience when they are adopted.

As we were getting ready to leave the home, I asked Amanda what we could do for her and her babies.
(I was expecting her to ask for material things or fundraising.....)  She looked behind me and caught eyes with a handsome little guy.  I turned my head to see who she was looking at and found a small boy with a very large head.  He was being cradled by his nanny. His gaze caught up in her eyes.  Amanda simply stated:

"Help me find Jack a family"
Immediately, I thought to myself that it would be quite a task to see beyond this child's physical apppearance.  His head was so heavy that it had to be held up for him to see around.﻿  I will never forget the moment she told him to speak... He said "momma" to his nanny.  God was showing me how sweet his little voice was and how he really was smart enough to make the connection that his nanny was his momma. 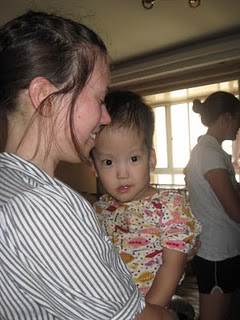 I left that day not thinking I could do much for this little boy.  His head was so large and most people would immediately jump to the conclusion he was brain damaged.  Not many families are willing to adopt a child with such a physical anomoly.  Especially if they looked at him and didn't really SEE him for what he is....
a child
a child with value
a child who is desperate for a family
a child deserving of a family
A little more than a year passed and I found myself home with two more children from China.  A "rush" adoption of Samantha who was 5 days shy of aging out of the CHinese adoption system and Piper who was 11 at the time of adoption.  It was a simultaneous adoption processed in 4 months...amazing. (and another ﻿
blog post for another day)  I was scouring the internet--reading my groups e-mails and clicking on blogs.  I love to keep up with the Chinese adoption world as they are like my family and have been since 2004﻿.
﻿
I decided to go to my friend, Annie Hamlin's, blog to see the beautiful kids needing families that she posts every week.  Her blog always has the children that are hard to place or new to the shared list/agency lists.
Usually, they have needs that are severe or maybe rare.  Thats when it happened--
I
SAW
JACK
He looked like a normal little kid as he had grown into his head.  He was grinning ear to ear--just like the gaze he gave his nanny when he said "momma" that day.  I was hooked.....I knew it-- and it hit me like a ton of bricks....it was ME...I was the momma he was looking for.
I knew the chances were next to none that I would ever get a glance from the CCAA. I had been diagnosed with breast cancer just two months earlier and I knew CCAA had not granted any family a PA that had a parent with a history of cancer.  It was even hard to get any agency to go to bat for a waiver "that big".
I was still in chemo treatment and had no idea what that would bring.
BUT- I had to try...It was in every fiber of my being that he was mine.
I called the agency that had Jack listed with a grant.  I am not one to look money in the eye and turn my back. (Especially since Jack would be the 7th adoption in our family in as many years.)  I prayed before I called that this agency would listen to my plea...that I am fine and I could parent Jack.  Having a child with the exact diagnosis as Jack would either be in my favor or be held against me.  I chatted with the agency rep and she said she would talk with her director....but first she needed to see a letter from my doctor----
(to be continued.......) 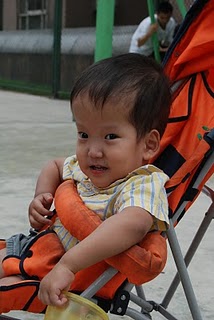 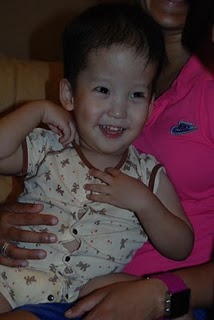