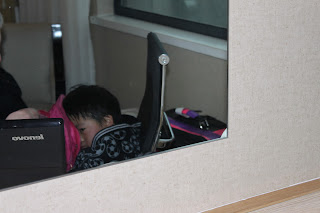 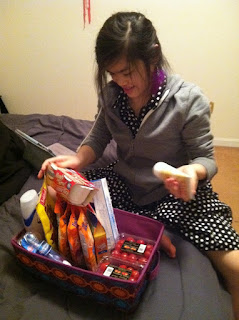 Here she is looking at her special basket of favorite foods. She loves beef jerkey, slim jims, pre made rice, grape tomatoes, and creamy chicken rice soup!!
written by Unknown at 8:00 PM 1 comment:

Well, we have had our first day and night with Elijah! It has surely been hours of ups and downs. The poor thing was so overwhelmed when he got here. His orphanage worker brought him to Dad and Matt's hotel room. When he walked in, he almost immediately kneeled down and began digging in the pink backpack he brought with him. This basically turned into him hiding behind the backpack for the next 45 minutes or so- so overwhelmed and scared! We tried to coax him with toys, snacks, and even Mom on the webcam (he stole a few glances, which I think helped him feel comfortable) but the turning point was when we found some Chinese cartoons- he finally dropped the backpack and began to look at things we had brought for him- playdough, toy cars, coloring books. He started interacting with me a bit when I would make a playdough shape and he would try to recreate it with his shape. I'm not sure head ever seen playdough before, though!

He eventually got comfortable enough to show us the snacks he had brought in his pink backpack (lays chips, seaweed, some jello-like thing, milk tabs, and a bottle of water) and also to try ours- some trail mix that mom had graciously packed us and some cucumber flavored Pringles that dad had picked up in Beijing- those were his favorite. Angela spoke to him and told him that he could leave his things in our room, and that we were going to lunch. We ordered him some noodles, and shared some steamed buns and gyoza with him- so entertaining to see the little guys with chopsticks! I think he was really overwhelmed with everything- so many people, us crazy looking foreigners, so much food, bright colors in the hotel. It took him a good fifteen minutes before he would eat, but eventually he did some serious damage on the food we gave him!!

After lunch, he and dad went up to the room together while Matt and I walked a bit around the hotel. When we got back to the room, dad said, "first smiles! The bubbles!". Elijah came up to us and promptly blew bubbles into our faces and giggled- and I think we all let out a sigh of relief.

The afternoon alternated between giggle fits and moments of frustration as we tried to bridge the language and culture gap- but all in all, everything seems to be progressing . slowly but surely. He did not react kindly to the pajamas when they were brought out- he quickly packed his little pink backpack and headed straight for the door! But a lot of hugs, some cartoons, and snacks later, and he and dad were both asleep together around 7pm, clothes and shies still on? It is 645am now, and he is just waking up! what a day!

Today, we go to the civil affairs office to finalize the adoption and then to the Zhengzhou orphanage. Pray for peace for his little heart, more giggles today, and understanding for us all!

written by Unknown at 6:22 PM No comments: