Fundraising - Is it a dirty word?

Most adoptions that are not through foster care can be at least $20,000. Many run as much as
$40,000.  There are not many people I know that have that much money laying around in a savings account.  Many don't even have a quarter of that.

I have adopted eight children and two of my adoptions were "two children simultaneously" from China.  I never had much money in the bank but I knew God would help me raise the money or bring it to my family somehow.  After all, He created the Universe so what's a "little" money to Him? Frankly, the last two adoptions were the only adoptions I distinctly knew where the money was coming from. (Tax refund from the other adoptions)

So, I want to share how the Lord funded a few of our adoptions so you can see HOW HE WORKS!

Our adoption of two girls in 2010 was completed in 4 months.  We found our 11 year old daughter first and then added our daughter who had four months to be adopted before reaching the age of 14.
Fourteen is the cut-off age for China - after the 14th birthday they "age out" and are "unadoptable."
Even if a family is found and they are processing or even on their way...ALL paperwork must be complete by that day.

Our adoption agency did not charge us extra agency fees for the second child and even their coordinator in China waived her "finders" fee for us.   (ask for fee waivers - all they can say is no)
I can remember we must have  had a little money laying around to pay the first fees for the adoption.  After that I began the "Dollar for Hope and Joy" campaign.  Basically I asked people to donate $1.00 to our pay pal chip-in account and then spread the word.  We made a decent amount of money and, of course, many people gave more than a dollar. (Hope and Joy are the girl's middle names)

The second fundraiser we did was a Vera Bradley drawing using face book and email as the PR as well as my blog.  We raised $3,000. for the girls.   Soon, it was crunch time and I was starting to panic. I had been asking for prayer on face book and some of my yahoo groups.  A friend from a past adoption trip shared my status and someone posted -- "Give them my name maybe I can help them".
I recognized the name of the poster as someone who had given us a $3,000. grant for our second adoption.  Her parents have allotted money for her to grant as she sees fit.  She has the joy of finding the families and giving.

I quickly wrote to her on her face book page and explained she actually "knew" me.  We chatted and she said she would really like to help us.  We filled out the application and sent it to her along with our home study (a home study is basically a report on your life by a social worker....very very detailed)  We were past the new year and starting to panic a bit about the remaining funds for travel and fees for two adoptions in China.  I estimated we needed roughly $23,000 before we could leave to get the girls.  Meanwhile, we had a deadline of March 1 for Samantha to be adopted.

A few weeks later, we got the call of a lifetime.

My new friend was granting us $6,000.00 for our adoptions!  Praise God for His provision.  Along with this grant, she was loaning us the other $17,000.00 to be fully funded!  Her father was writing us a personal check for the $17,000.00.  She said we could pay it back with whatever funds became available in the next few years.  (Tax returns etc.)  We were floored and just praised God for His anointing on our adoptions of these young ladies! (Yes, complete confirmation we were in His will)

Out of the blue--adoption friend from years before-- random face book status seen - fully funded!

Another time God showed up was when we were adopting our daughter, Brighton, in 2009.  We were three weeks from traveling and we needed 13,000.00.  Our daughter was from a poor province and she had a haircut where her head was shaved except for a wisp of bangs.

Laying in bed one night, I was thinking about how to get the funds we needed in such a short amount of time.  We had sent our application to Shaohannah's Hope and had not heard back from them yet.
I also knew we could apply to the ABBA Fund and ask for a loan.  I really didn't expect a grant from Shaohannahs Hope because we had been denied twice before.  I was wracking my brain trying to come up with some gimmick that would bring a huge amount of attention to our need and separate us from the other 100 families asking for funds.
Suddenly I knew --- BALD FOR BRIGHTON! 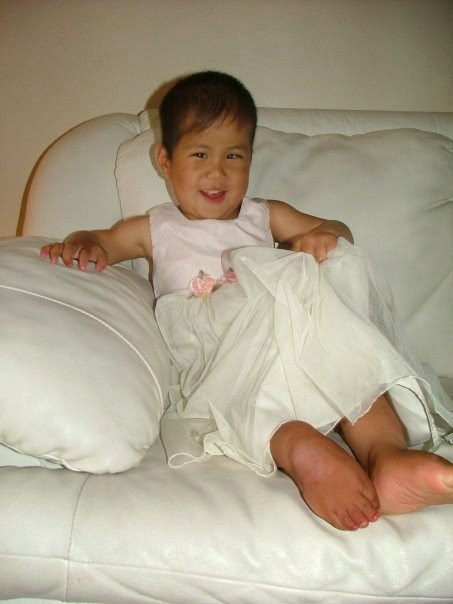 I poured my heart out on face book and the yahoo groups I was on and told the members I would shave my head if I could raise $5,000.00 before we traveled in two weeks.  I promised once I returned to China with Brighton I would shave my hair off.


Again and again, the Lord provided for 8 adoptions on a teachers salary with me as a stay at home mom.  He asked us to be obedient to the Call and promised us He would take care of the rest.
Thousands of dollars came from donations and checks from complete strangers.  They were called as well....to GIVE.

If you are adopting and are concerned the money wont be there...STOP IT.  Believe His promises because He is faithful to you.  He shows up in the least expected ways at the time when you have begun to lose hope.  Sometimes we have lost hope and its all we have to cry out to Him for help.
He wants us to rely on His power and provision.  He relishes your praise and love and the fact you will give Him GLORY in the end.  Hes an ON TIME God.

Yes, the money is an issue and it is hard to raise in your own power.  However, He does not ask us to go on this adventure by ourselves.  He delights on the fact we need Him.  We are made stronger in our weakness.....God provides and sets the lonely in families.

Don't doubt your calling if money is the thing keeping you from obedience.
Allow Him to work in other's lives to provide for you.  Allow them to BLESS you.
God desires you to cry out to Him and ask for His help.  Ask Him to provide in ways that only He can get the Glory.   Then, sit back and watch Him work.

There are many ways to fund raise... I pray God leads you to the idea that best suits your family!

Most of all, allow the Lord to guide you in your money spending decision as you do the budget for the month.  You can cut corners in so many different ways. (drop cable, drop extra cable channels, don't get your nails done, stop eating out, skip your vacation this year, get rid of an extra vehicles or trade in the one with a high monthly payment for a cheaper older model, clip coupons and shop sales etc...)  I could go on and on.

Lastly - because this blog post is getting out of hand--


Fund raising is NOT a dirty word.
Fund raising is a way to allow others to bless you and
allow God to shower you with His love, faithfulness, and provision.
BE in the CENTER of His will
.....its the best place to be ever!